Last autumn I visited the North Kent Marshes for the first time, an invite from musician Adam Chetwood. He spoke of wildies that were spread throughout the fleets. A journey began that has taken a year, lost landscapes, broken houses, a hidden moat and the feral carp. But it has been a tough year, in six months I had lost both parents – this landscape now holds a special place for me, a breathing space during some sad times. I hope the film translates the sense of openness, and of wilderness that lie just 35 miles from London.

The film will be released on the Fallons Angler YouTube on Friday 17th September at 5.00pm

My wife Lucy has created a limited edition A2 poster which can be purchased here https://fallonsangler.net/product/wildie-film-poster-limited-edition-print-by-lucy-merriman/

In a time when we need to be resourceful, thoughtful towards our neighbours, the Lea marshes are proving to be an immensely important place for the people of East London. Right now we need space, air, and nature as an antidote to what is going on with the pandemic. In layman terms the marshes are perfect, we don’t need music festivals, car parks, bigger ice rinks, we simply need the space with a little amount of unobtrusive management to support the local community.

I shot this film over the last few years with a mix of hand-held cameras as I spent time on the marshes, fishing and walking.

Of all of the months in the year, August is probably my least favourite month to fish. By August the rivers are low and I’m in a perpetual state of apathy, my mind is wandering towards September and October. With summer stalking for carp pretty much over (even the carp seem to get lazy in August?) I spend more time just watching. Yesterday the Old River Lea in Hackney looked at its finest with gin clear water running through the sun dappled trees and above I could hear a bird of prey, most likely a kestrel.

It makes me wonder that a small silver fish stocking programme would really make this river complete again and encourage the Lea fishermen of old back to some familiar haunts and show their grandchildren how to fish. With next to no tidal variation on this stretch, platforms could be built on the harder to reach swims while low banked runs like the stretch below would be the perfect place to nurture a new passion for angling. With the nearby Middlesex Filter Beds now flooded, this whole area is really becoming an interesting area for conservation and the natural world.

After the gale force winds earlier this morning, the Lower Lea took on the colour and pace that resembled the middle stretches of Wye in January. I was quite surprised to find that by the afternoon most of the fallen trees had been moved off the main paths around the Hackney Marshes, some of these trees were quite sizeable. This efficiency from Hackney council is akin to my own dear father who at the age of 82 was repairing his own fallen fence as the tail of the storm was still passing by at eleven o’clock this morning!

Along the Lea a few fallen trees were exposed and shattered, a recent reminder of their sudden and violent demise, while giants still stand alone on the Marsh undeterred by the passing storm. 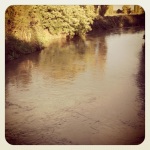 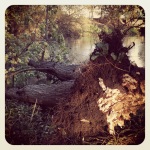 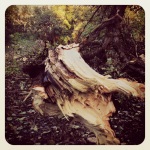 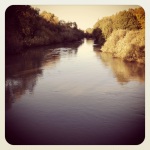 Last year I wrote about the White House public house that stood alone in the Hackney Marshes near the end of Pond Lane. Run by Mrs Beresford this was one of the prime tickets to hold on the Lower Lea. Today the tuesday swim had the privilege to hold one of these hundred year old subscriptions, issued by Mrs Beresford. 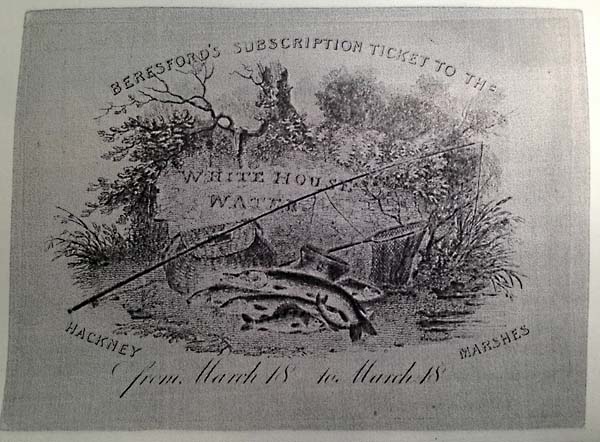 When the snow comes the aesthetic change is quite obvious, where as the acoustic change is more subtle and this brings a stillness to the landscape. My walk today on the marshes was a wonderful duo-tone of colour and was only broken twice, once by the flash of orange from a passing fox and nearing my journey’s end the shrill of two sparrow hawks seeing off a rather brave but very large crow. 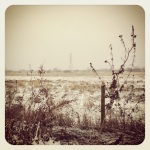 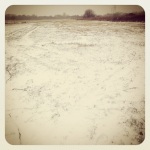 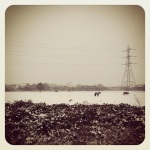 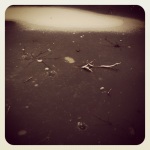 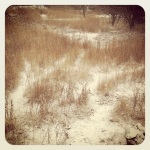 I’m now lucky enough to live close to the Hackney Marshes, a ten minute stroll takes me through Millfields Park, across the Lea Navigation, through the Middlesex Filter Beds and then onto a large expanse of football pitches, known as the Hackney Marshes. At first site this could look like any municipal area created for Britain’s second most popular participants sport, football but around the outskirts of these pitches lie many interesting natural features along with tales of past goings on, many of a dark and sinister nature. The marsh had been left untouched subject to Lammas rights (land split up into strips and used for producing hay and used only for grazing) hence why no building development had gone ahead in this area.

But in 1893 Sir John Hutton, the chairman of the London County Council dedicated the marshes to be an open space for the people of London after mounting pressure from various public groups including the Rev E K Douglass who ran the Eton Mission at Hackney Wick. Rev Douglass pointed out that the lads football club connected with the Mission has been ordered off the marshes by Drivers who had proceeded to carry off their goal posts! With growing pressure a final sum of £75,000 pounds was paid to the Lord and the commoners who had rights to the land by Hackney Council, giving the land back to the people of the borough for recreational use.

At that time the following extract from a pamphlet set out by the London Parks Committee describes the marsh as “a large area of flat meadow land, lying on the eastern boundary of London and intersected and skirted by the river Lea and its tributaries. It is 387 acres in extent, and three and a half miles from the Royal Exchange.” With this new aquisition, the council was about to change the marshes for ever but for many this was not for the better as the marshes represented a real rural idyl with the central marshes still having a sense of the wilderness about it especially when approached via surrounding villages like Clapton, Hommerton, Leyton and Hackney Wick. One such fondly remembered inhabitant lived on the outskirts of the marsh, there lay a ramshackle building where its occupants would greet passers by, by selling ginger beer and sorry looking cakes together with fish caught from the Navigation Cut laid out in dishes. Unsucessfull anglers could fill their creels with fish on return from the Lea enabling them to feed their families and keep their sense of personal pride. This wild almost anarchic  area was starting to loose its dark reputation as the Lea’s tributaries were drained and access became less of a challenge as one could now wander off the designated paths. The Lea itself was now controlled by new higher banks and flood relief channels, the marsh was now in name and not in nature.

Romany gypsies camped out on the marshes in the late nineteenth century.

The Lea of old held large fish, pike of 25 lbs, trout 11 1/2 lbs, barbel 13 1/2 lbs,  chub 7 1/2 lbs, carp 11lbs, bream 5 3/4 lbs and ells of  6 3/4 lbs. One of the principle spots to catch these monsters was around the White House fishery boasting 150 subscribers each year. The White House pub stood alone in the middle of the marshes run  in the late 19th century by widower Mrs Beresford and her sons. Mrs Beresford reputation as a courteous hostess became well known to the Walton desciples that descended onto the Lea who took sanctuary in the pub with its walls adorned with stuffed birds aquired by Mrs Beresfords late husband George a keen hunter and fisherman. In earlier days the inn was frequently visited by Dick Turpin and other like minded types who felt save in the refuge of the marshes, knowing that only the bravest of law enforcers would venture into this wild area. The inn finally fell silent in 1917 when no interest was taken in the license and so it was demolished.

Another notable fishing Inn was the Horse and Groom on the Lea Bridge Road and at the opposite end of Hackney marshes the White Hart Inn by Temple Mills the last point where the river Lea is tidal. 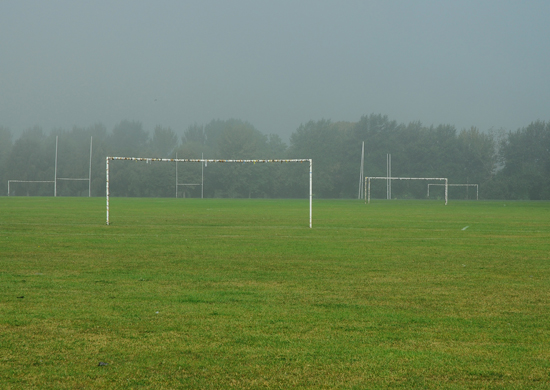 The marshes are now fully tamed, dotted by endless rugby and goal posts. In the background (above) behind the row of trees lies the river Lea still frequented by a few anglers and indeed the Tuesday Swim. Behind me lies the Lea Navigation where large carp reside, yes the canal carp are still on the Tuesday Swims radar but that will be next year. The marshes have survived the Olympics tidying up policy and still retain a  real sense of the  past with the old Victorian engineering in the Middlesex Filter Beds and the meanders of the old Lea, stubborn in its path. There is still a lot more to explore in this area and I shall come back to it here at the Tuesday Swim.

Here is an extract from ‘Angling’ or ‘How to angle and where to go’ by Robert Blakey from 1877. 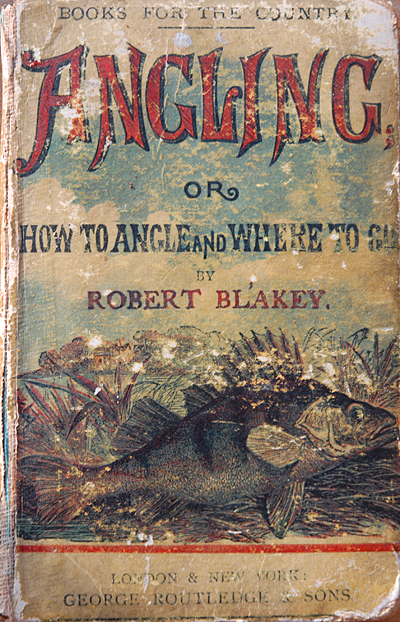 ‘The White Horse, Hackney Marsh, is a locality much frequented. The liberty of fishing here is let out either by the year, or by the day. The subscription for the season is ten shillings and sixpence; this includes the right of trolling  for trout or jack. One shilling is the charge for a day’s sport, including fly fishing  and bottom fishing, but not trolling. There are great numbers of fish here; and some capital sport is occasionally obtained.’

‘The Horse & Groom, at Lea Bridge, is a very old angling station, having been used as such for upwards of a century. The angler has here the liberty of two miles of water on each side of the house; and the terms are precisely the same as at the White Horse. The fish are commonly more numerous here than on any other portion of the river, chiefly on account of the locks being here, and the fish can ascend no further unless a passage be opened out for them. Sometimes the fish may be seen in immense shoals about the vicinity of the locks, and may readily be taken by even lowering naked hooks amongst them. Trout of twelve, pike of twenty-five ,barbel of nine, and chub of four pounds, have been taken out of the Lea in this locality.’

The sun has relented #mouseholecornwall
The return to camp was spectacular last night #westsussex #westsussexlife #sussexcamping #cricketerspub #cricketersduncton
#westsussex #duncton #summereducation #pub! #cricketersduncton
Holiday homework #cultbritishfilms #thesailorwhofellfromgracewiththesea
Flight #astralflights #swifts #jetstream #hackney #hackneygarden
The joy of making, creating bespoke frames for artists and art lovers #bespokeframers #londonframers #hackneyframing #theclaptonframer #hackneycrafts #artframers #pictureframers #pictureframersofinstagram
#microlurefishing for #wildbrowntrout
Quiet
I find it difficult writing about the process of catching a fish, but this story had another layer worth sharing. Fallons Angler issue 26 out now - in the company of Britains finest angling writers #fallonsangler #tench #tenchfishing #sevenpoundtench
Pond Life
Back to the hammock
Oh joy! Seeing an old friend is great but after Adam just discovered he won Best Show Garden at RHS Chelsea 2022 was priceless. Adam looked down at the artificial stream in the Rewilding British Landscape Garden and said ‘so good, you could cast a fly into it.’ It was. Adam I hope we cast a fly soon, lovely to see an old Sussex boy.
Can never pass Ditchling Beacon without taking a stroll. #ditchlingbeacon
Another film done - Gritstone and Galena link in bio
Loading Comments...