Last night, Caught by the River held an evening with John Andrews, Luke Jennings, Charles Rangeley-Wilson and Chris Yates at the Stag in Hampstead. As John said “welcome to the CBTR lounge” and that’s exactly what it was, friendly, funny and at times quite moving. The ‘four’ all distinct in their style of writing and delivery created an atmosphere similar to that of a fireside chat after a day on the river, reading favourite passages and telling tales of monsters, lost and found.

Luke, you better finish that book…

For those in the area of Hampstead, four days into the traditional pike season, may want to ditch the floppy hat and instead stroll proudly, Dennis Pye cap set at a jaunty angle, into The Stag to hear John Andrews, Luke Jennings, Charles Rangeley-Wilson and Chris Yates, all in conversation. So put down your Chapman’s 700, detach your pike bung and gimp trace, roll up your shirt sleeves and enjoy a pint or two in some marvellous victorian surroundings…

Yesterday The Tuesday Swim put on hold a planned trip to catch a Lea Navigation pike and instead joined a celebration of Old Father Thames on Southwark bridge.

Friends of the tuesday swim were in attendants, Caught by the River and Andrews of Arcadia. The Caught by the River stage had fish related tunes spun by Richard Norris while contributions came from Jon Berry, Luke Jennings and the rather aptly dressed John Andrews…

Luke and John both read tales of London pike as darkened grey clouds blew in to the Thames basin adding to the darkened mood of large Serpentine monsters, gazette floats and characters stalking the towpaths of London. John also read out a marvellous piece on the London roach pole, an example of which was on display in the Miniature Museum of Thames Angling. The Arcadia van was suitably dressed in Efgeeco canvas, possibly the first bespoke tailored van in history, the fine work that could have come from the London area of St James. 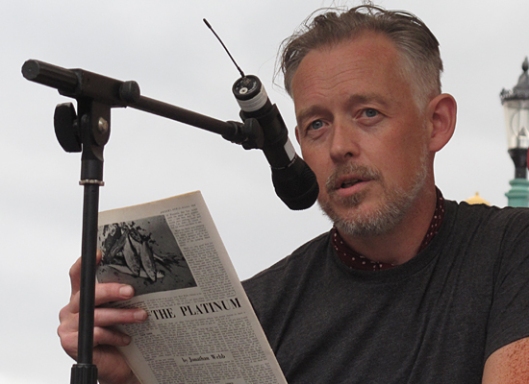 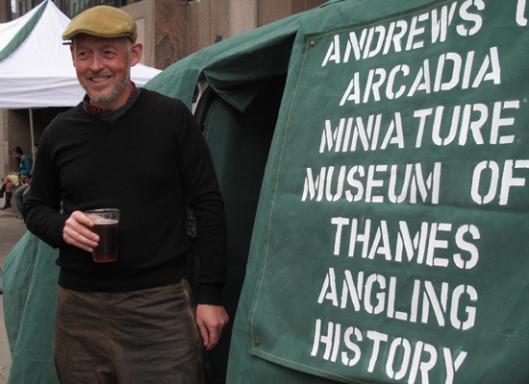 Plenty of familiar faces appeared throughout the afternoon, some good Horsham Ale and welsh cider was drunk while a few loose plans were made for some forthcoming autumnal fishing trips. Lets hope they become a reality…