Great documentaries are produced by great story tellers, visionaries with a clear message and understanding of the subject. Angling is generally documented through the prize shot, the end result, the final climax, man or woman holding fish, sometimes thrusting the fishes head into the camera for extra dramatic effect, it’s a macho world of size and weight recorded for everyone to give the big thumbs up or ‘like.’ The photographing of anglers and angling in a different light is sorely unrepresentative when it comes to the main angling press and media with very few exceptions. I agree that on occasions a good trophy shot is interesting to view especially in the case of an exceptional capture but there is more to it than that. With technology in both stills and video improving and affordable, there are many inspiring images coming from anglers many of which come from using their smart phone, its portable and always in your pocket.  A more recent addition to the anglers kit is the Go Pro style of clip on video camera, they are brilliant but placed in the wrong hands (or head) have now left us with a deluge of wibberly wobbly footage of man struggling to land fish with the winds blasting out any comprehension of what they may be trying to say. In the right hands this technology can be exciting and enhance a sense of freedom that film makers have never before experienced. Two lads that I have followed for a while are Carl And Alex, who started off filming their fishing exploits while still quite young and now have a huge following, including coverage in the main press, but their passion and enthusiasm for fishing is key and a real joy too watch. Even as two youngster they show a real maturity and can put together films with a strong narrative,  that engages the viewer throughout.

Capturing the quieter moments in angling, the long periods spent in contemplation, appreciation, and solace is something that as a photographer I want to explore further. Last year I spent four days with Michael a ghillie and custodian of a beat on the River Blackwater, a thoughtful man who loves his river, who spoke with a real passion and knowledge for the salmon that run its course. Yes salmon were caught, trophy shots administered, whiskies sunk but one afternoon I took these shots  that  highlighted the trip for me. We were all standing on the Lower beat at Killvullen, a wide shallow open stretch of water, the fishing was slow so I took out my camera with a long lens and caught Michael away from us anglers just for a few minutes,  spending time lost in his own thoughts. 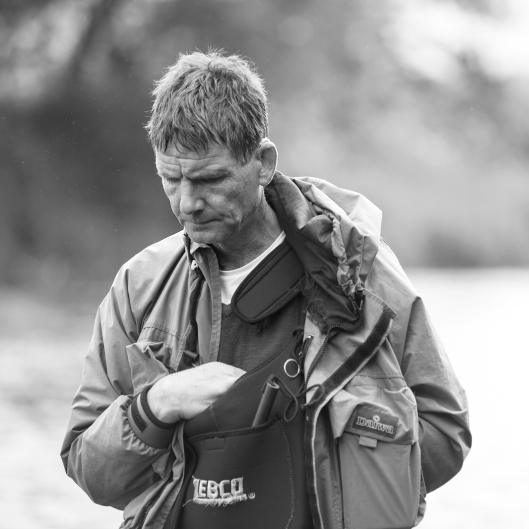 I consider Carl, Alex and myself all artists who want to share our experiences, we are different, but we both have a place, I hope that more anglers will realise and explore the possibilities beyond  the hysterical world of high fives, numbers and wibberly wobbly footage. As someone famous once said and I cannot remember who, music is nothing without the silent spaces between.

I appreciate vintage tackle and I am an angler, but sometimes combining the two together can cause some upsetting moments by the waterside.
On Sunday I decided on a quick hour of spinning for pike on the Lea despite all of the recent rain. My theory was thus, the water had been running fast for three weeks and now as the water was dropping an opportunist pike must be lying in wait in the slack water. Armed with a box of plugs and a bait-casting rod I headed down to the river to find it still running faster and higher than I had ever seen before, the colour was like tea made by a Frenchman, Liptons bag with too much milk.
The sun was appearing through the trees and it looked to be a pleasant day so I was quite happy trying out a few different plugs at varying depths, speeds and actions, trying to locate the slower water. After a while I decided to put a lovely old Heddon Go Deeper River Runt on and explore the deep, slower water. The Lea was up about a meter so I thought the lure should stay off the bottom. This lure has a fantastic action that vibrates the rod tip in such a distinctive manner that you always know the lure is fishing properly and not twisted or caught on the trace. On my fourth or fifth cast the the lure caught on something just near my feet about two foot out from the bank, dammit!
After much pulling from all directions I finally went for the ‘pull’ and the 25lb braid gave way, leaving no resistant, the lure had been lost. God dammit!!!!
Losing bits of tackle including vintage tackle is part of angling but losing this lure in the raging river Lea really pi**ed me off as I knew I was unlikely to get it back. After a another few casts I left for home.
Obsessive? me? No surely not!
I had one glimmer of hope though, the Lea was running high so I could return as the river dropped and hopefully find the obstruction that my River Runt had clung onto? The Lea is not really tidal anymore due to the Olympic Park but at low tide on the Thames the water flows out of the Lea more quickly and drops about 2-3 feet. Low tide was due at 9.50 am the following morning and with no rain for the previous 48 hours it should drop even further. But fearing another angler or dog walker would pass by and spot my lure I decided in a paranoid moment to make a quick visit before dark, so to look like I was not abandoning my duties as a father on a Sunday I took my daughter along in the pram. The river was falling but when I arrived at the crime scene the water had only dropped about a foot, my lure was nowhere to be seen.
Monday morning had arrived so I included a visit to the Lea while heading to work. At 9.30 am I arrived to find the river down about a meter and there in the torrent of water was a lone twig, Excalibur stood alone with my River Runt clinging on for dear life, swaying backwards and forwards in the fast current!
Now I had the simple task of cutting down a branch, creating a fork, stepping down into the silted mud in my trainers, pushing the lure off, knocking it upstream and flicking it onto the bank. As I said before, obsessive? me? No!
Well, it all went to plan and my Heddon lure now sits on my desk at work all safe and sound, while my trainers dry off below, leaving a faint smell of River Lea in flood…lovely!

Quiet
I find it difficult writing about the process of catching a fish, but this story had another layer worth sharing. Fallons Angler issue 26 out now - in the company of Britains finest angling writers #fallonsangler #tench #tenchfishing #sevenpoundtench
Pond Life
Back to the hammock
Oh joy! Seeing an old friend is great but after Adam just discovered he won Best Show Garden at RHS Chelsea 2022 was priceless. Adam looked down at the artificial stream in the Rewilding British Landscape Garden and said ‘so good, you could cast a fly into it.’ It was. Adam I hope we cast a fly soon, lovely to see an old Sussex boy.
Can never pass Ditchling Beacon without taking a stroll. #ditchlingbeacon
Another film done - Gritstone and Galena link in bio
Fallons’s Angler have promised to do a film up north, delayed over the last two years we finally met up with Graham Vasey on the Tees and soaked up the atmosphere while Graham trotted for the grayling. @will_memotone dropped the perfect notes over the top. The film will be out tomorrow at 4.00pm (25th march) on the Fallons’s Angler YouTube channel
Another Fallon’s Angler trip done, the epic Tees, a unique pub with the atmosphere of a forgotten front room and good fishing. Our new northern adventure coming soon… #kirkhead #teesgrayling #fishingfilm #fallonsangler #teesdale #canonc100 #trottingthefloat #traditionalangling #wadingtheriver #durhamfishing
Finally made it to the Tees, filming starts in an hour #fallonsangler #fishingfilms #grayling
Packing the camera kit for the Pennines - A Fallon’s Angler film coming next month. Waterproofs, waders and binoculars at the ready. #anglingfilms #fallonsangler #graylingfishing #rivertees #pennines #fishingfilms
It’s hard clearing the last few items from my parents house, some items I’m familiar with like the tobacco tin full of drills, others are not so, like the stamped coat hangers found in my father’s wardrobe, coat hangers ‘pinched’ over a lifetime, London, Bristol, Scotland - stories now lost.
Goodbye 2021, it has been one to remember #neighbourhood
The sun did return in spectacular fashion #wintersolstice
Snuck out Friday for a pre lockdown chub, the healing qualities of a fish is fathomless #chubfishing #mentalhealth
Loading Comments...