On Saturday 2nd April 2016 the Angling Auctions in Chiswick finally drew to a close when the hammer fell and lot 630 – “An unusual American Bamboo trout fishers creel” was sold. Slow applause permeated throughout the hall in appreciation for Neil Freeman who has put the hammer down on 32,000 lots over the last twenty five years offering vintage fishing tackle, taxidermy, books and angling art to a worldwide audience of collectors and angling enthusiasts.

My involvement began in 2011 (I’m considered a relative new boy) when John Andrews of Arcadia asked if I could help out on the rods. Arriving in Chiswick I was soon put to task in the construction of the rod rack, an antique in its own right, but a protector of fine fishing rods. Neil told me that he built the rack in 1991 with a drunk Irishman, a story I must confess I believe looking at the quality of its construction, but in  defence of the Anglo-Irish workmanship it still survives with it’s biannual kicks and trips that it has to endure from eager anglers grasping at the wonders it beholds.  Five years on I am still putting up the same rod rack, stuffed with even more matches and bound with ever more gaffer tape.

Over the years staff have come and gone but generally there is a core that stay loyal,  Neil’s brother has been involved from the start and more recently Neil’s son Sam has worked as a porter. Fresh sandwiches and cakes are made and the all important tea urn is switched on as soon as we arrive on the Friday morning, the tea urn is first off and last on the van, a tradition that has lasted since the beginning. Last Saturday the tea urn was loaded onto the van for the last time in Chiswick and a new beginning for the Angling Auctions has begun down in Romsey, Hampshire. Hopefully I will see you there? 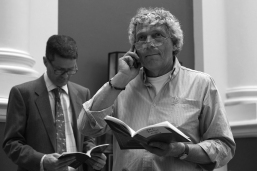 This friday from lunchtime onwards you can visit Chiswick Town Hall and spend the afternoon looking through collections of vintage fishing tackle all broken down into lots. Using simple but well built tackle from a bygone era is an experience many of us now cherish when escaping to the waters-edge. On saturday you will get the chance to bid on such items from midday onwards.

As ever the Tuesdayswim and Arcadia will be donning suitable attire and showing you the selection of fishing rods on offer.

Twice a year The Tuesday Swim and Andrews of Arcadia meet for the biannual Angling Auctions at Chiswick town hall, West London. Viewing is available from Friday lunchtime and the main show commences at twelve noon on Saturday the 6th April.

This not so un-likely pairing shall as usual be holding fort on the rod section, please come along and re-arrange the rods from their allotted places and enjoy our anguished faces as said rods are moved back INTO THE CORRECT ORDER!

If only the military was organised with such efficiency and precision. 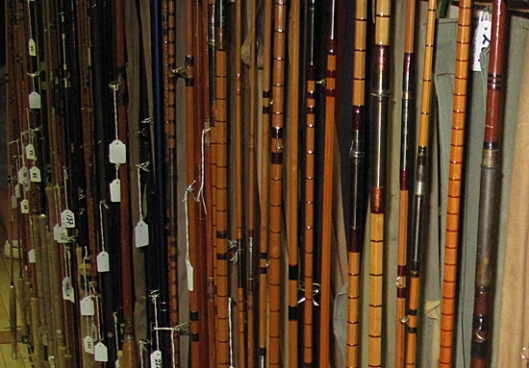 Myself and John Andrew of Arcadia take on the bi-annual task of donning a tie and looking after the rod section at Angling Auctions at the Chiswick Town Hall, London. Twice a year we carefully un-wrap the cling film from the bundles of rods, assemble the rods while avoiding the old light sockets dangling from the town halls ceiling in wait for an excitable bunch of traditional anglers.

I do this twice a year because of my interest in old tackle, I like to hear the tall tails from some larger than life characters and generally listen to John having a moan, wouldn’t miss it for the world! If you are in the area I urge you to drop in either for the viewing on Friday 28th September and Saturday morning or try the auction from noon onwards. Each auction is an education and beyond the usual displays of Coxon’s and Silex’s are the boxes that lay under the tables, old collections of tackle and potential gold. Prices are up and down but there is always a bargain to be had, even without a penny in your pocket it is well worth a visit but don’t tell Neil I said that!

If you like the smell of old tackle shops then pop down this 28th and 29th.

While helping out at Angling Auctions on the 26th March, this year, I came across this little cased gobio gobio, the case measuring 11 inches wide. The gudgeon was set up by J Cooper and Sons. Caught by F W Jefferies in a private pool in Bournebrook near Birmingham on the 15th August 1936.

Shame, I fancied this one for my book shelf.

Last week we spread my parents ashes on the South Downs. In life they were inseparable, so we did the honourable thing and mixed their ashes with our own hands, returned them to the chalk on the Sussex Downs at a geographical point between birth, life and death.
The Prince of Peace is dead, thank you for the musical and spiritual journey of my life. 1940-2022 #pharoahsanders
A quick over nighter by the river and under the stars with @fallonsangler_magazine for a new film. Packing light - bedroll, camera, drone and a Katsu Curry Pot Noodle or two. Film out in a fortnight. In the meantime please order our new issue of Fallons Angler capturing the bewitching hour. #autumnequinox #fallonsangler #fishingfilms #canonuk
Norway, reassuringly boring with some hidden surprises #norway #oslo #snorway
The Merry Maidens - a quiet moment away from the beach and the body boarding. #merrymaidensstonecircle #stonecircle #burialchamber #crabsandwiches
The sun has relented #mouseholecornwall
The return to camp was spectacular last night #westsussex #westsussexlife #sussexcamping #cricketerspub #cricketersduncton
#westsussex #duncton #summereducation #pub! #cricketersduncton
Holiday homework #cultbritishfilms #thesailorwhofellfromgracewiththesea
Flight #astralflights #swifts #jetstream #hackney #hackneygarden
The joy of making, creating bespoke frames for artists and art lovers #bespokeframers #londonframers #hackneyframing #theclaptonframer #hackneycrafts #artframers #pictureframers #pictureframersofinstagram
#microlurefishing for #wildbrowntrout
Quiet
I find it difficult writing about the process of catching a fish, but this story had another layer worth sharing. Fallons Angler issue 26 out now - in the company of Britains finest angling writers #fallonsangler #tench #tenchfishing #sevenpoundtench
Pond Life
Loading Comments...