I won’t start quoting BB in Confession of a Carp Fisher but his book did paint a picture on numerous occasions of hot still summer days sat by carp pools being tormented by large carp that were basking and occasionally slurping from the surface scum.  The outcome for BB seemed to be the same each time, no carp, just broken dreams.

This week I have grabbed a few lunchtime sessions but not once did I get a take, I came close but again nothing came of it. I ran out of my usual Chum mixers a few days back and opted for Sainsbury’s own brand, have they stopped making chum mixers? I soaked a few in preparation for this Sunday mornings session. By eleven in the morning I had noticed three large carp all ‘twenties’ lurking under the willow tree opposite our flat, so a few handfuls of mixers (Sainsbury brand) were thrown from the balcony. After 20 minutes all three were taking the bait, I ran downstairs with tackle in hand and perched low right on the edge of the canal in front of a concrete planter. Opening the soaked mixers I soon discovered that they would not stay on the hook, too soft, and right in front of me I had a large ‘twenty’ feeding away! Luckily one thing I always keep in my bag is a tub of pop up Cell boillies either to fish on the bottom as a pop up or as a floater. So I tied one on with a hair and cast it out in front of the path of the three cruising carp.

I was well hidden away and the carp had no idea I was there, swimming only seven or eight feet away, I threw a few more free offerings out as one of the carp, at least a ‘twenty’ took down an early lunch. I could see it thinking it was that close to me and I could see that it had spotted my bait…my heart was beating like a drum, the carp slowly approached my bait and then its lips widened and engulfed my bait.

Last time I hooked a carp here on the canal a few months ago (on a Sunday), I had 10 lb line, a hundred year old centre pin reel and a James Aspindale Carp Deluxe rod, which looking back put me at a slight disadvantage so this time it was all ‘stepped up’ with a shortened B James Mark IV, Cardinal 66 (good clutch and fast retrieve) and 12 lb line, surly this time I could bring a London canal carp to the net? Although still an old bit of kit this is by far no compromise and quite capable of handling this situation.

I’m sure as the carp engulfed my bait she closed her eyes, thankfully mine were wide open and I struck into a powerful fish. Immediately the carp bolted for the canal boats as I expected but my fine tuned clutch put enough pressure on her and the tackle to give a balance and hope that I may finally bring my prize home. The Mark IV was bent right over but I had been there before and this time I was not concerned about the tackle failing as the clutch let out ten meters of line. Then slowly I stopped her with the rod tip under the water trying to avoid any snap offs from the metal hulls of the boats. I managed to start reeling in little by little but I knew that the carp at the end of this line was big, powerful and still full of fight. Again the clutch slipped and she took a few metres, if I was a betting man I would have put a 50/50 bet on this tussle at this point in time but just as I thought there was a chance an almighty surge came from beneath one of the canal boats and the sound of a massive “crack” echoed around the wharf as the line snapped! With only two days to go before we leave this little London Redmire I laughed to myself knowing that this was probably my last chance, I will try again tomorrow if it looks promising but I have a new family to tend to, a new house to move into and a business to run, I think this time around it’s not going to happen with the London canal carp…I’m am very disappointed. 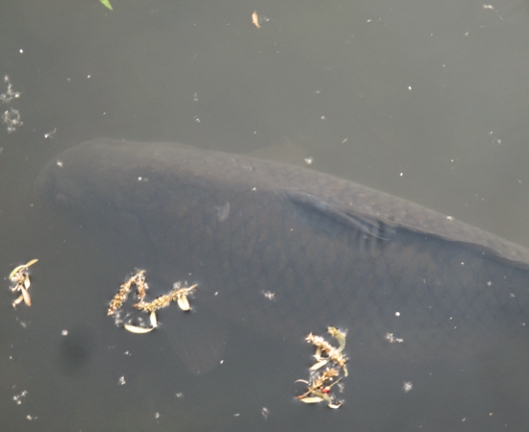 1 thought on “Thems carp are driving me mad, especially on Sundays!”

Quiet
I find it difficult writing about the process of catching a fish, but this story had another layer worth sharing. Fallons Angler issue 26 out now - in the company of Britains finest angling writers #fallonsangler #tench #tenchfishing #sevenpoundtench
Pond Life
Back to the hammock
Oh joy! Seeing an old friend is great but after Adam just discovered he won Best Show Garden at RHS Chelsea 2022 was priceless. Adam looked down at the artificial stream in the Rewilding British Landscape Garden and said ‘so good, you could cast a fly into it.’ It was. Adam I hope we cast a fly soon, lovely to see an old Sussex boy.
Can never pass Ditchling Beacon without taking a stroll. #ditchlingbeacon
Another film done - Gritstone and Galena link in bio
Fallons’s Angler have promised to do a film up north, delayed over the last two years we finally met up with Graham Vasey on the Tees and soaked up the atmosphere while Graham trotted for the grayling. @will_memotone dropped the perfect notes over the top. The film will be out tomorrow at 4.00pm (25th march) on the Fallons’s Angler YouTube channel
Another Fallon’s Angler trip done, the epic Tees, a unique pub with the atmosphere of a forgotten front room and good fishing. Our new northern adventure coming soon… #kirkhead #teesgrayling #fishingfilm #fallonsangler #teesdale #canonc100 #trottingthefloat #traditionalangling #wadingtheriver #durhamfishing
Finally made it to the Tees, filming starts in an hour #fallonsangler #fishingfilms #grayling
Packing the camera kit for the Pennines - A Fallon’s Angler film coming next month. Waterproofs, waders and binoculars at the ready. #anglingfilms #fallonsangler #graylingfishing #rivertees #pennines #fishingfilms
It’s hard clearing the last few items from my parents house, some items I’m familiar with like the tobacco tin full of drills, others are not so, like the stamped coat hangers found in my father’s wardrobe, coat hangers ‘pinched’ over a lifetime, London, Bristol, Scotland - stories now lost.
Goodbye 2021, it has been one to remember #neighbourhood
The sun did return in spectacular fashion #wintersolstice
Snuck out Friday for a pre lockdown chub, the healing qualities of a fish is fathomless #chubfishing #mentalhealth
Loading Comments...
%d bloggers like this: