For the traditionalist angler a pike on Boxing day is a nice way to end the years fishing. This year I was in Sutton Coldfield so a good choice of venue for a pike was the rather sinister sounding water of Blackroot set in the grounds of Sutton Park. The lake is actually quite beautiful but as I was to find, quite a busy place on a Boxing day morning.

I fished from the dam end wall where just one other angler was fishing for carp and pike. The morning was very foggy but by the time I had arrived it was lifting which was a shame as the sun soon followed making my chance of a pike a little less likely. Behind my swim was the concrete footprint of the old changing rooms that would have accommodated the brave swimmers that took the cold Boxing day water in the past.

With just a few hours to fish esox did not pay a visit but it was worth the effort to get out in the crisp still air. 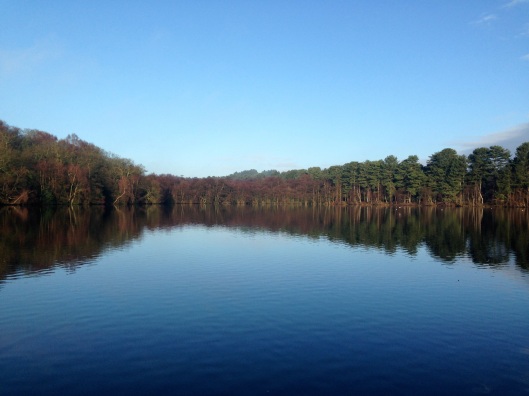 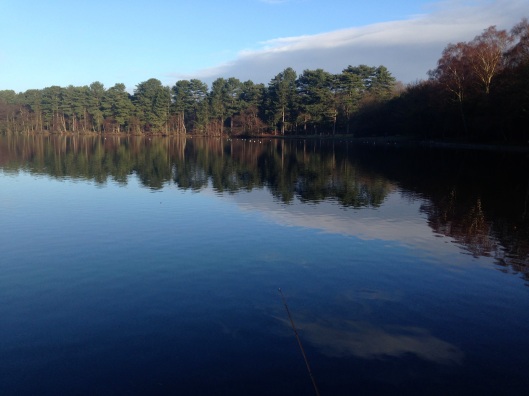 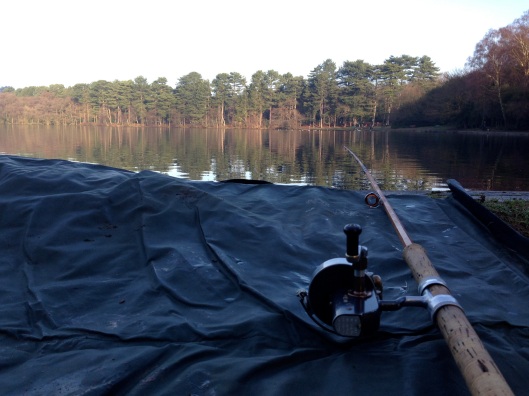 It’s the start of January, work is back on the agenda, rain is lashing sideways on my window, even a kestrel has landed on my window sill to shelter from the driving rain and lost opportunities in search of pike over Christmas play on my mind.

Only now the unemployed, unemployable, retired or just plain fortunate can benefit from a short mid-week session in search of  Esox. At weekends with limited time the challenge is to leave the comfort of your own home or the lure of the local for a pint of brown and an open fire. January is a fine month for short sessions in the pub, while others take themselves  jogging around the park, detoxing and  stretching muscles they thought they never had, the January pub is a quiet place for the guiltless few to be enjoyed before the joggers return in a month or two…dissapointed, as predictable as the returning swifts!

But a far more rewarding day can be had venturing out for pike! Armed with gimp wire, a small bag of basics, a few sprats and some plugs, one can be lost in a darkened grey scene with only the orange or yellow of a bung to focus on. So my next excursion will be on the Regents Canal where my friends narrow boat is moored for the winter months. It’s a spot that holds pike, only a few months ago I watched a  young eastern  european lad  (wearing a jaunty placed grey/silver Trilby) spin for pike and although not connecting with one, managed to lure two away from their lair, only at the last-minute the pike veered off, maybe the pike saw that silvery hat!

So without Trilby I shall be on the Regents and The Hertford Union Canal around Victoria Park in E3 in the month of January and February in search of Esox with the added bonus of a wood burner and hot tea to make the experience a little more comfortable.

For those who don’t make it out this winter for pike may instead want to read ‘On Nature’ the second compilation by the Caught by the River crowd. Part of that crowd is John Andrews who has written (with a lot more skill than I can ever hope to) a piece titled ‘Winter Pike Fishing’, this short, sums up the pike and the pike angler perfectly for me. Other writers include Chris Yates, Dexter Petley, Luke Jennings, Bill Drummond and Charles Rangeley-Wilson.

Just as I write this an email has come in from John Andrews also supporting the  January social scene with a gathering at The Stag in Hampstead on the 24th January with the first Caught by the River event of 2012. See you there?

Goodbye 2021, it has been one to remember #neighbourhood
The sun did return in spectacular fashion #wintersolstice
Snuck out Friday for a pre lockdown chub, the healing qualities of a fish is fathomless #chubfishing #mentalhealth
To accompany issue 24 of Fallon’s Angler we took along our own tea boy. Did he fish? Find out in our new film launching in a week or two - just as the postman comes a knocking #fallonsangler #Chris yates #riverstour #kevparr #fishingfilms #traditional fishing
The fish of autumn #perch #perchfishing #perchfishinguk
A recent uncovering on Chatsworth Rd #clapton
Traditional birthday lunch at the Grapes turns into a mudlarking session #mudlarking #deadrat #claypipes #treasure
Wildie a film. Stills from the last six months on the Hoo Peninsula. To watch click on link in my bio or go to the Fallon’s Angler YouTube channel, there’s plenty more angling related films with a similar treatment #anglingfilms #carp #wildcarp #feralcarp
Out now on the Fallons Angler YouTube channel or link in my bio #wildies #feralcarp #wildcarp
We finally celebrated with friends after our wedding in May. Along the way we dragged two acts out of retirement Trevor Moss & Hannah Lou and my dear old friend Inky Blackness on the decks. Deep down soulful sounds from two ends of the spectrum 🙏
Bow top wagons in Sussex #bowtopwagon #sussexlandscape #southdowns
Back on the river today where it all began forty two years ago. 30 or so chub on the float, nothing massive, then a send off as I returned home #sussexouse
Actually it’s been a tough year but here I am up a mountain with my wife. Apologies, I seem to have my fly open. Photo credit Olive.
Oh the Lakes! Giver of endless stone wall, sticky pub tables, clutch crunching roads, my pilgrimage is almost at an end, perhaps one more fell tomorrow?
Off to photograph Blencathra when something caught my eye on Threlkeld Common #blencathra #threlkeld
Loading Comments...