Having no car to drive for the first half of this year focused my attention on my local river – the Lower Lea,  potential swims were scrutinise more closely than ever before. The trips planned were to be frequent and short, tackle was set up and ready to go, a bicycle permanently rested in the basement, attached to the cross bar – a modified 42″ landing net, a three piece 10′ Allcocks spinning rod strong enough for hard fighting carp and a very long bank stick – in fact its a storm pole off a bivvy door, although I must confess I’m not too sure what the original purpose of it is, I’m guessing it is a method to sure up the door on a bivvy when a tornado hits? Anyhow I saw it in a tackle shop a few years back and thought it perfect for holding a rod high on the river bank, it has proven very useful when barbel fishing. A shoulder bag contains a reel, camera, polaroids, and an old bait box with all the accessories that a modern angler needs to trap a carp. Finally an old green bucket holds a mixture of baits and doubles as my seat.

Before the season began I kept a close eye on the river and by mid May I could see signs of carp, I also came across one or two other anglers discretely looking with intent, on occasions a few words were exchanged but generally we all kept to the unwritten code of ‘keep quiet and carry on.’  You can find carp quite easily from Broxbourne (and probably beyond) down into Hackney and through central London and out the other side, all you need is a warm sunny day, a bicycle and a some  polaroids, I will guarantee you will find carp within a few hours of riding, whether they are feeding though is another question.

My time on the river since June 16th has probably totalled to about 7-8 hours,  each trip amounts to only a couple of hours but it suits my freelance routine, I can drop my daughter off at school and pop down to the Lea or nip out during lunch time. So far I have not managed to get on the river early morning or at dusk, something I want to remedy in August. The Lower Lea also holds a large head of good sized bream, the ‘silvers’ have all but vanished but I had heard that 5000 dace have been introduced by the EA to the lower Lea catchment in the close season, lets hope that they thrive.

To date I had a couple of carp at the start of the season, notably a linear on the 16th June, and a few days later a common, both fish were  around 7-8 pounds, these fish are very long and strong fighters, but these were the smallest of the carp that I have seen. I have observed a few fish well into their twenties and one or two that could be in their thirties, I had some heart-stopping moments with the polaroids  when these larger carp were feeding hard on my bait, frustratingly these moments were cherished under the cloak of the closed season. 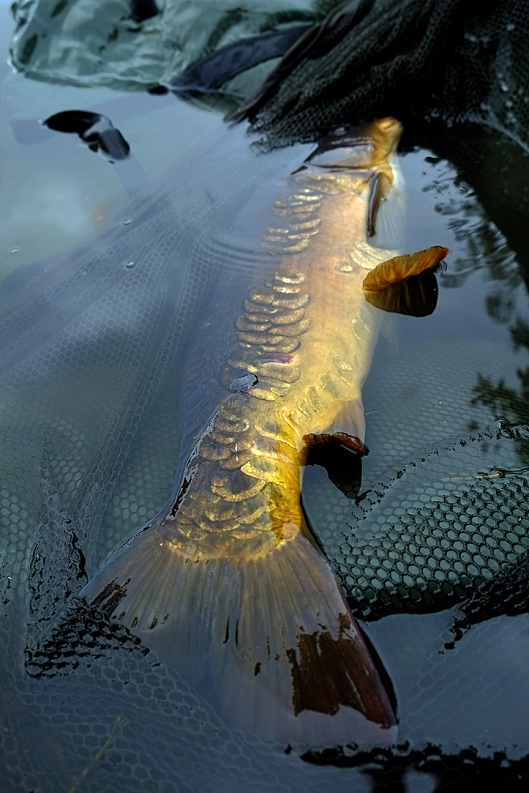 August will soon arrive and after a short holiday I will attempt to get back on the river to continue my quest to catch one of the larger fish, but I must confess after cycling down to the river over the last week I have not seen a fish, my theory is that  after a heatwave they move into faster flowing and deeper water where oxygen levels are higher, making observations next to impossible. But I have a cunning plan…

Quiet
I find it difficult writing about the process of catching a fish, but this story had another layer worth sharing. Fallons Angler issue 26 out now - in the company of Britains finest angling writers #fallonsangler #tench #tenchfishing #sevenpoundtench
Pond Life
Back to the hammock
Oh joy! Seeing an old friend is great but after Adam just discovered he won Best Show Garden at RHS Chelsea 2022 was priceless. Adam looked down at the artificial stream in the Rewilding British Landscape Garden and said ‘so good, you could cast a fly into it.’ It was. Adam I hope we cast a fly soon, lovely to see an old Sussex boy.
Can never pass Ditchling Beacon without taking a stroll. #ditchlingbeacon
Another film done - Gritstone and Galena link in bio
Fallons’s Angler have promised to do a film up north, delayed over the last two years we finally met up with Graham Vasey on the Tees and soaked up the atmosphere while Graham trotted for the grayling. @will_memotone dropped the perfect notes over the top. The film will be out tomorrow at 4.00pm (25th march) on the Fallons’s Angler YouTube channel
Another Fallon’s Angler trip done, the epic Tees, a unique pub with the atmosphere of a forgotten front room and good fishing. Our new northern adventure coming soon… #kirkhead #teesgrayling #fishingfilm #fallonsangler #teesdale #canonc100 #trottingthefloat #traditionalangling #wadingtheriver #durhamfishing
Finally made it to the Tees, filming starts in an hour #fallonsangler #fishingfilms #grayling
Packing the camera kit for the Pennines - A Fallon’s Angler film coming next month. Waterproofs, waders and binoculars at the ready. #anglingfilms #fallonsangler #graylingfishing #rivertees #pennines #fishingfilms
It’s hard clearing the last few items from my parents house, some items I’m familiar with like the tobacco tin full of drills, others are not so, like the stamped coat hangers found in my father’s wardrobe, coat hangers ‘pinched’ over a lifetime, London, Bristol, Scotland - stories now lost.
Goodbye 2021, it has been one to remember #neighbourhood
The sun did return in spectacular fashion #wintersolstice
Snuck out Friday for a pre lockdown chub, the healing qualities of a fish is fathomless #chubfishing #mentalhealth
Loading Comments...
%d bloggers like this: