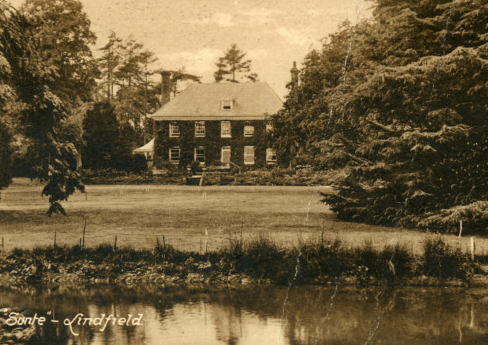 Growing up in the seventies and eighties, the local woods was my playground, a place of freedom and discovery, a real living breathing Xbox,  where armies were formed and disbanded, explorers lost and found, a place of endless possibilities. To get my band of brothers to the woods we had to negotiate ‘no mans lands’ – a hundred yard track that led up to the gates of Sunte House, a seventeenth century manor house and its custodian, Mr Gorer or ‘Old Man Gorer’ as us brothers of the woods called him. Unlike many manor houses, Sunte House was not austere, its large windows gave it an airy appearance, the slate roof tiles enhanced this, in bright sunlight they sparkled a silver-grey, echo’s of  past garden parties resonated in the grounds , there seemed to be an air of happiness about this place in the not so distant past.  At the start of the track was a cattle grid with a hand painted sign in black and white now flaking away, it read ‘Sunte House – Private – No through road.’ The cattle grid was ‘ours’ a place of safety, a look-out for Old Man Gorer, it was a game of cat and mouse that we played out for years. Old Man Gorer was an elderly man, always dressed in a three-quarter length beige mac, normally undone, he looked  dishevelled and always aided by his scruffy collie dog. For years I feared he would collar me, in hindsight he was frail, he was quite elderly and never posed a threat .

As we grew so did our courage, one evening we decided to break into the gardens of Sunte House and explore, dressed like commando’s we entered on the west side through a gap in a barbed wire fence and found ourselves on a meandering path, a canopy of exotic shrubs grew up high and blocked out the sky,  many of the plants were labelled, lead tags etched with their botanical names. The west side was dark and quite eerie, somewhat neglected, but still maintained a certain order, someone had curated this garden in the past, there was a sense of Victorian plant collector about this place. We were relatively well hidden on the west side but to gain access to the east side and the main garden we had to dash across the front drive across a manicured lawn in full view of the house and potentially Old Man Gorer. It was still daylight, there were no lights on in the house,  we waited until dusk, then made our move. As the light dropped we edged out from the shrubs on our hands and knees and onto the  lawn, quickly we sprinted across the open fifteen yards. Once into the cover of the main garden we found more labelled shrubs and another perimeter  stone path. We followed the path around tentatively in case we encountered Old Man Gorer coming around the opposite way. As we crept along the light through the shrubs was changing, it was getting lighter and it was moving, it was unclear what I was seeing and then I could sense  water, the garden was hiding a secret, a large pond. Pushing through the undergrowth I could see a rectangular pond with an island in the middle, lily pads everywhere, and moss covered stones and rhoddendrons lined the edge. It was still and quiet, the distinctive smell of water was present, huge Scotts Pines towered  above creating a high canopy, it was reminiscent of a Japanese garden but with an English accent. Suddenly the wind started to pick up and sway the trees, a barking dog in the distance un-nerved us, could it be Old Man Gorer’s dog? We decided to retreated and return another day. For weeks the pond played on my mind, I sometimes questioned if the pond actually existed, it was so enchanting and I was so fanatical about catching carp from lost ponds, I thought I may have imagined it.

The rest of the summer was spent  seeking out carp ponds within cycling reach of my house, scanning Ordnance Survey maps for little blue dots often nestled in patches of wood in the middle of open fields, these were forgotten hammer ponds. Once located I would jump on my bike and see if I could gain access, permission was rarely asked for, just some discreet commando style fishing. Hammer ponds are abundant in Sussex and often go back to a pre-Roman era. Sussex geology was rich in ironstone, the main material for iron production and  water was essential to the cooling of the iron. During the Stewart and Tudor times iron production boomed and more hammer ponds were created by the damming of small streams and rivers. Often these ponds had a small population of carp, tench and roach not giant carp but  a five-pounder  was a real prize and I  always hoped to discover a pond with wild, un touched Roman wildies.

My quest for hammer ponds took my mind away from the Sunte House pond for a while but soon I had to return, I would have to try to fish the pond, this was going to take all of my nerve. I decided to return to the garden alone, not with a rod but with some bread and see if there were any carp. Once again I arrived at dusk, I was about to step over the fence when a figure silently walked past literally only a few feet from my face, I froze and he continued on, it was Old Man Gorer inspecting his garden, probably enjoying the late evening air. I was convinced he saw me, the woods were dark but he decided to walk on, I was after all just by the public foot path, and he probably encountered the public there on many occasions, I imagined he had no interest in me, the public and  knew nothing of my intentions. I returned home thankful that I had not gone into his garden a few minutes earlier and  become trapped on the west side by the pond. After that rather uncomfortable close call I decided to have a break from the pond and concentrate on trying to catch a double figure carp elsewhere, I still had a few weeks left of the summer holidays, this was a target I  set myself and had yet to achieve.

It was a couple of years later when one evening after messing about in the woods that I decided to return to the garden with a friend and see if we could locate any carp, it had been a hot summers day and if the pond contained carp then tonight would surely be the night to find them feeding? Our  access to the garden was easier than ever as much of the perimeter fence had fallen down, the house looked neglected and the garden more overgrown than usual, we darted across the lawn as we had done before and into the west side.  Making our way round the dark perimeter path I felt something was not right, the light was different and the smell? As we approached the pond I peered through the shrubs only to discover a flat lawn, no pond, no island, just  green grass, it was as I feared, my imagination had run wild, it was a ghost pond. We left the garden dejected and I was somewhat embarrassed after dragging my friend into danger to see the pond that never was.

In 1985 Geoffrey Gorer died and the house was sold, every now and then the new owner could be seen driving past in his beige Mercedes, he looked fairly en-friendly, new fences and  ‘Private – No through way’ signs were put up, it was clear the new owners didn’t want any funny business, once again  I forgot about Old Man Gorer, Sunte House and the ghost pond.

Thirty years on it is 2016, I still think about that pond, did I imagine it, did I see Old Man Gorer that night, the more I contemplated it the more I doubt it’s presence. I decided that I was to make one final pilgrimage to the garden, my plan was to walk up on the Sunday morning after a family gathering on the Saturday night. Today access can only be made via the public footpath, the cattle grid entrance is now blocked. I set off on a cold wet morning, the mud underfoot was eight inches deep in places but for the sake of an hours nostalgia I was up for it, I soon came to the two open fields in front of the house, now fallow and quite overgrown with brambles, to my right was the ten foot high hedge that hid the garden. The hedges had been thinned to encourage new growth from the base and I could see a way through and into the inner fence. Pushing through the hedge I got to the old iron fence and could see the familiar stone perimeter path, beyond that I could clearly see the ghost pond, a Monet style wooden footbridge spanning over to the island, this time in the plain grey light of a bleak January morning I could confirm that the pond was a ghost no more.

While writing this piece I decided to do a online search for ‘Sunte House’ and ‘Gorer’ and was pleased to discover that Old Man Gorer or Geoffrey Gorer as he was known, was one of three brothers from a well to do jewish family from Hampstead, all  educated at Westminster college, with Geoffrey and his younger brother Richard both going on to Kings College, Cambridge.  Richard studied music and horticulture and moved in to horticulture professionallly soon after Geoffrey bought Sunte House in the 1950’s, the house must have been the spark to change his career.  One day while walking in the grounds Richard noticed a spontaneous hybrid of the shrub Abutilon which is now a popular species that still exists today called ‘Suntensis.’ It is probably Richards influence that made the gardens more a botanical collection of some repute. Throughout his career Geoffrey  had been a prolific author on the subject of anthropology, he  had a passion for the arts and mixed in some rather interesting social circle including George Orwell and the poet Edith Sitwell. His body of work including 10,00 letters and manuscripts are now preserved in the Kings College archive.