After my last post I was feeling a little sombre, fishing trips deemed to be put on the back burner for a while, but as it turns out the last fortnight has been blessed with a couple of fruitful and quite diverse experiences.

An editorial meeting for issue four of Fallon’s Angler took place in south London which ended with an impromptu visit to the Ravensbourne with a single rod and a few left- over maggots. Sharing a rod, myself and Garett the editor of Fallon’s we managed to winkle out some chub, rudd, roach, perch and gudgeon, larger chub were visible in the clear shallow water but they eluded us this time. As dusk fell we retreated to the safety of a couple of pints and discussed the final touches to issue four. For those who take the periodical it won’t be long now, and those who don’t shame on you. Personally I think Fallon’s is getting better and better, we are finding our feet with the look and editorial content becoming much stronger. Issue four sees new contributors such as John Andrews and Luke Jennings  and there are some exciting names coming up for the future from some angling legends. 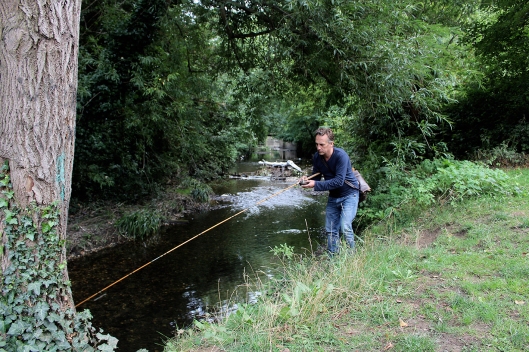 With some final amendments to issue four I required to get some extra images especially of our regular contributor Steve Roberts who is the River guide and face behind Rivers Days, stationed at Pangbourne on the Thames. With the Ashes in the bag we had a relaxed day drifting in his punt with an opportunity to catch some perch and pike, and to get some shots. By the time I had turned up (by train) ordered lunch and a couple of pints it was mid afternoon but there was no rush, the temperature was high and we were soon afloat on the Thames with a cool breeze to make it comfortable. While Steve fished I got in the Thames in my waders and started to get some shots. I stood on a old part of an island know as the cliff, “why the cliff Steve?” I said, “well if you step over another yard or so the waters drops off into eighteen feet of water!”

A day on the Thames with Steve is a whole experience, the secret places that you visit, the fishing, the lunch, conversation and hopefully a fish or two. Our afternoon was a lazy one and I had a few perch but as the afternoon faded Steve offered to take me to a private stretch of water on the Kennet where the chance of a barbel was possible. As the light faded we turned up on the lawn of a private house and running along the side of the garden was the river Kennet, it was warm and the air quite still, there was a sniff of barbel in the air.

At the start of the year I bought an early Allcocks Wizard and it has sat in my basement, dormant awaiting a christening. I had heard a lot about the versatility of these rods and I was keen to catch a barbel on it and see if it was capable of handling such a fish in a fast flowing river. As the light faded I was lucky enough to do just that and soon had a nice Kennet barbel in the net of around 7lbs. The rod was exceptional and does have a wonderful sensitive top with a solid backbone, now my rod of choice! By ten I was heading back from Newbury on the train to Paddington, the contrast from an hour previously could not have been greater, people heading from Reading to London for a night out while I with my fishing bag and rod set off for home. 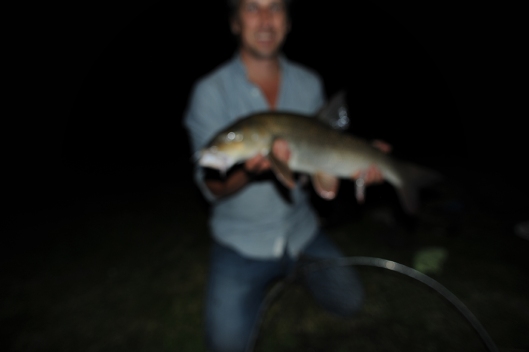 Steve needs a little help with the camera on occasions!

3 thoughts on “Mad dogs and an Irishman”

Dropped in tonight to see the magnificent Balcombe Lake, Spent many nights here as a teenager mainly catching bream.
Fallons Angler 21 has arrived, the creative guns are blasting for 22 and 23, for me though the cameras have laid relatively dormant over the last year, but slowly we are picking up pace, plenty of new films organised and ready to shoot including this one ‘Wildie’ which includes an author and conservationist, a farmer, a musician and a load of feral carp, wrapped in a stunning landscape. #wildcarp #feralcarp
#local
Down by the River today #sussex #cuckmere #chubbing
TBH we’ve spent most of the day by the fire
Part of my cultural apprenticeship, thank you #ripchickcorea
Just when you turn a corner...#saveleamarshes
Thinking about the merits of moving to a derelict house in Sussex #littletollerbooks #greenmanofhoram
I’ve been aware of this kit bag all of my life, it went on family camping trips in the seventies but I only understood what it was about ten years ago. It’s a great thing #raf
Good to be out filming today. Covid compliant
Pleasingly grey today
You know 2020...
Sanctum #hackneymarshes
Keep it in the family- Back cover for the forthcoming issue of Fallon’s Angler by Lucy Merriman
Loading Comments...
Comment
×
%d bloggers like this: