Since June 16th I’ve not been out fishing due to all sorts of things getting in the way, but I have managed to spend some time observing the Lower Lea, my disguise is my daughters pram and a pair of Polaroids, laden below the perambulator are some free bait offerings and a catapult just in case I come across some feeding carp.  The Lea around Hackney doesn’t really get fished that much although I have seen a few regulars all fishing for a different quarry. It is now mid July and we are having a proper heatwave, the river is running clear and the fish are probably only biting at dawn and dusk or in the night.

You may ask why am I pointing out these anglers to you on a fairly average stretch of river? Well, the Lower Lea is not an easy place to fish, with past pollution outbreaks and now a dominant presence of the cormorant, the poor old fish population has suffered but there are plenty of above average fish still in the Lower Lea, I know because I have seen them and on the odd occasion caught them. To be a Lower Lea angler you have to be resourceful, banks are over grown and the fish are hiding below the over hanging branches and under-cut banks from the ever-present cormorant. Getting to a swim can be quite demanding although now in mid July long dry trodden grass reveals the routes taken by anglers to the rivers edge. Once a swim is cleared of the Giant Hogweed and the burning blisters subdued, a session on the river can commence, as I said the Lower Lea angler is no ordinary piscator, he has to take his fishing just a little further. 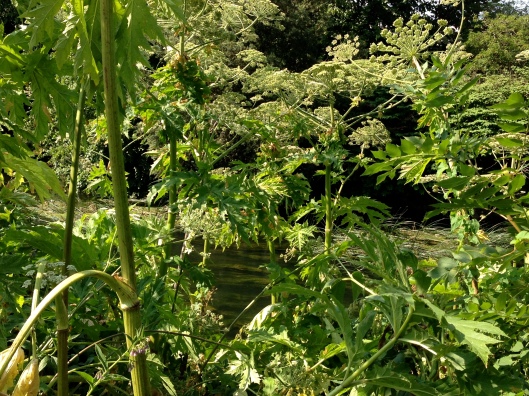 A frequent visitor is the quintessential rover searching for perch and pike, armed with a rucksack, short spinning rod and a few soft and hard lures, he does quite well, I’ve seen some photos of his catches, including a huge perch of 3lbs plus. I’ve seen him walking a good stretch of the river and canal covering a good few miles each time while I dart between glides on a mountain bike, a simple approach but with results. 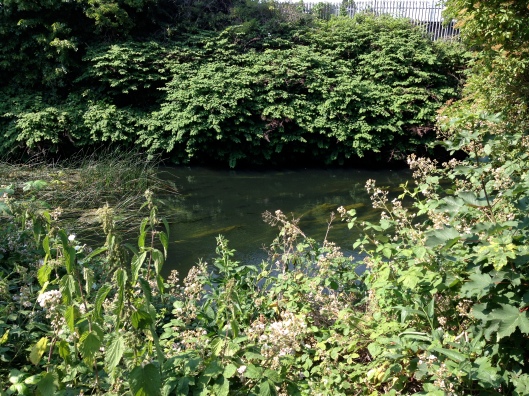 This chap reeks of the Jim Gibbinson era with his camouflage jacket, aviator Polaroids and shoulder length hair, he starts fishing at around midnight, no bivvie for him just a thick jumper and the shelter of a overhanging bush. I came across this guy one morning tucked away oblivious to many a dog walker as he sat in wait for one of the huge carp that cruise by in the streamer weed. He told me of monster bream he had caught that night, up to 10 lbs! I’m used to listening to anglers tales of monsters but this guy sounded ok to me, his approach and knowledge of the river seemed pretty sound and his captures matched with my own observations of where the big carp and bream lie.

On the better dressed side of angling I came across an angler sporting a pair of waders and a red beard in search of chub or possibly an elusive London brownie. After climbing down the side of a broken wall he was seen wading out into the head of a weir casting up into some faster flowing water. I told him of some chub further down and he soon departed and disappeared through the tall grass.  A spirited challenge I thought as I moved on pushing the pram.

The Lower Lea has a fascination, quite different from the Walton days and the three hundred years of industrial abuse it has endured afterwards, now I feel that this short stretch of river has reclaimed a sense of being natural again, wild and left to its own. Dog walkers, joggers and pram pushers all pass by, oblivious to the nature and the anglers that lurk, all hidden away.

4 thoughts on “The Lower Lea – A neglected river & her anglers.”

Off to the marshes #hackneymarshes
I’ve been here before but this is reassuringly familiar, an antidote to the boutique homogenous lifestyle that is rife in our city. Once it’s gone, it’s gone.
Watersmeet- Our current winter film set on the Hampshire Avon with @adamchetwood @kgparr link in my bio. Where to next? #anglingfilms #chubfishing
Watersmeet - Chub fishing on the Hampshire Avon, our new film for winter #hampshireavon #hampshireavonfishing #chub #fallonsangler #fishingfilms #winterfishing link in bio
A reunion on the Hampshire Avon. Our new film for Fallons Angler ready to view in time for Christmas. Friends, pints, and fishing #chubfishing #chub #fishingfilms #fallonsangler #hampshireavon
Surely it’s time for a perch?
Epping forest #eppingforest
The fading light plays a strong roll on us at this time of year. The Witching Hour film available to view, link in bio. #embracethedarkness
Next week I travel to France and begin filming a life in Normandy over one year. A man whos footprint on the planet has the lightest touch, where his life and the natural world sit side by side. #dustthefilm …
The Witching Hour our new film launching at midday today 15th October link in bio #fishingfilms #fallonsangler
Last week we spread my parents ashes on the South Downs. In life they were inseparable, so we did the honourable thing and mixed their ashes with our own hands, returned them to the chalk on the Sussex Downs at a geographical point between birth, life and death.
The Prince of Peace is dead, thank you for the musical and spiritual journey of my life. 1940-2022 #pharoahsanders
A quick over nighter by the river and under the stars with @fallonsangler_magazine for a new film. Packing light - bedroll, camera, drone and a Katsu Curry Pot Noodle or two. Film out in a fortnight. In the meantime please order our new issue of Fallons Angler capturing the bewitching hour. #autumnequinox #fallonsangler #fishingfilms #canonuk
Norway, reassuringly boring with some hidden surprises #norway #oslo #snorway
Loading Comments...
%d bloggers like this: