Saturday morning started with torrential rain that lasted for a few hours, when it subsided I walked out into the garden to find that it was very warm, almost humid, it felt very carpy. Using my transcendental water crafting skills I surmised that the Lea Navigation was finally going to offer up a carp for me. It was midday when I decided to embark on a reconnaissance trip on the bicycle with Polaroids, a catapult and some bait. Within fifteen minutes I was cycling back home with some haste, I had spotted for the second time this week a group of carp feeding, all congregating next to a natural looking stretch of the canal with reeds, lilies and over-grown bank-side vegetation. Once home I gathered my rucksack, Mark IV and net, downed some lunch, spooled up some new 12lb line and then returned to the canal, making sure I kept calm, too much excitement can cause mistakes.

I prefer to fish the canal early morning or late in the evening to avoid the flotsam and jetsam on the towpath so being early afternoon I was visited by the usual mix of cyclists, joggers, walkers, continuous cruisers and loners escaping the city. To be honest this part of the canal is relatively quiet so I quickly got settled with my fishing and started to trickle in the bait and try to get the carp to feed with confidence.

Within and hour I had a carp take a floating bait in the clear water which resulted in a terrific powerful run straight down the middle of the canal, I could see its flanks quite clearly, a linear mirror of around 15 to 20 lbs, my clutch was set right, the rod was well sprung but after the first initial run the hook pulled! Inspecting the damage I discovered that the knot has failed, it was a classic school boy error! Even now I am unsure why I was so slack on tying this knot, it was a blood knot of four turns (I usually use a palomar) and now looking back I’m  thinking I didn’t even tuck the knot, mistakes like this were done in the 1980’s, my mind was not focused and I had lost a great fish.

A re-tied hook using a palomar knot was cast out but there were still two knots in my rig that had not been looked over, despite being annoyed with myself I carried on fishing, carp fever had taken over and once again I had another run. This time the carp ran in the other direction, the fish was on for a good minute until again it came off under a lot of pressure. During the fight a man rocked up in his tracksuit and witnessed the battle and the parting carp. With a Polish accent he said “you downt haver the right equipment, my friend?” Right now I didn’t need this interloper but I looked at him and said “I had 12lb line and the gear was fine” I had nothing else to add.  As I reeled in the line to inspect the catastrophic failure for the second time I found that another knot has failed on the rig, another blood knot! The man came close and looked at the curly end of my line, “you down’t know how to tie ze knots!” “F**k off ” was my only thought but in truth he was right, I had ballsed up big time and now this cock-sure tosser was swaggering off down the towpath pointing at the water and calling out “hey, my friend, I can zee your big fishy swimming away”.

I had to re-group, start again with new knots, take off the last fifteen feet of line just to be extra safe and as it states on the side of my mug that sits on my desk ‘Keep Calm and Go Fishing’. While I re-tackled I put out more bait and after a good wait the carp came in to feed. With only a few minutes before I had to get home I had my third run. Again the carp ran down the middle of the canal, the clear water showing its flanks, everything seem to be holding tight. The carp came in close and ran along side the towpath, as this happened another carp of a similar weight chased after it thinking it was in a amorous mood, but it wasn’t it was angry and fighting with real power. These canal carp really do fight so hard, at first they don’t know they are hooked but once they sense a problem they go berserk. After a few more minutes of playing the carp I very carefully netted it and bought it up and onto the towpath.

Although I have not put too many hours into catching a canal carp, it has taken a good five years doing the short stints to finally get one on the bank. In the past all my carp have come from the River Lea, so this was a special fish.

As an experiment this season I don’t take scales with me, I would rather spend time  getting fish back in the water than fiddling around with weigh slings and sticking a number on it. For me it has added a new element to my fishing, to appreciate rather than record it. But for those who insist on a number it was probably around 17-19lbs, the carp was long and wide, the photos below don’t really do any justice to the shear size and length but it does show the wonderful dark colouration on the top and the scale pattern. After her return she sat on the canal bottom and sulked for about two minutes, something that I was quite akin to doing after my costly mistakes, thankfully this carp put me in a considerably better mood.

Confession over, expletives made, and now the canal carp curse of ‘BB’ has been lifted. If you want to read any of my previous close encounters with London canal carp please click here. 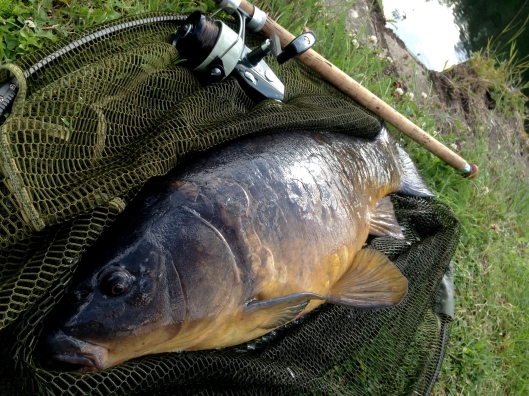 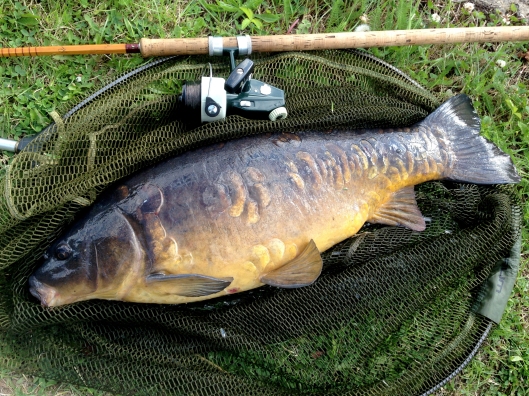 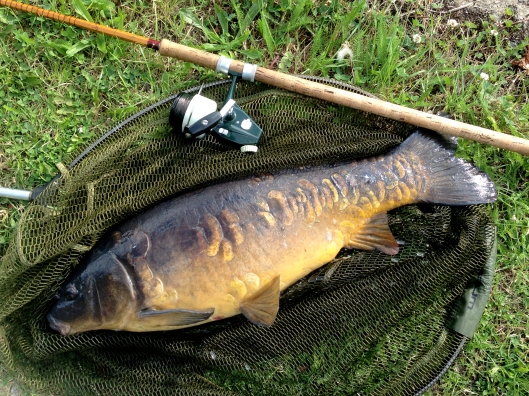 6 thoughts on “Confessions of a canal carp fisher.”

The fish of autumn #perch #perchfishing #perchfishinguk
A recent uncovering on Chatsworth Rd #clapton
Traditional birthday lunch at the Grapes turns into a mudlarking session #mudlarking #deadrat #claypipes #treasure
Wildie a film. Stills from the last six months on the Hoo Peninsula. To watch click on link in my bio or go to the Fallon’s Angler YouTube channel, there’s plenty more angling related films with a similar treatment #anglingfilms #carp #wildcarp #feralcarp
Out now on the Fallons Angler YouTube channel or link in my bio #wildies #feralcarp #wildcarp
We finally celebrated with friends after our wedding in May. Along the way we dragged two acts out of retirement Trevor Moss & Hannah Lou and my dear old friend Inky Blackness on the decks. Deep down soulful sounds from two ends of the spectrum 🙏
Bow top wagons in Sussex #bowtopwagon #sussexlandscape #southdowns
Back on the river today where it all began forty two years ago. 30 or so chub on the float, nothing massive, then a send off as I returned home #sussexouse
Actually it’s been a tough year but here I am up a mountain with my wife. Apologies, I seem to have my fly open. Photo credit Olive.
Oh the Lakes! Giver of endless stone wall, sticky pub tables, clutch crunching roads, my pilgrimage is almost at an end, perhaps one more fell tomorrow?
Off to photograph Blencathra when something caught my eye on Threlkeld Common #blencathra #threlkeld
#returntoforever 2021
Got the last one! From my trusted Englerland outfitters on the Old Kent Road. #1966
Wildie the film - A tale of old England - out in August, pure fishing steeped in history in an ancient landscape. #wildiethefilm #feralcarp #ghostcarp
Wildie anglers need wilder places #wildiethefilm #wildcarp #storyofoldengland
Loading Comments...
%d bloggers like this: